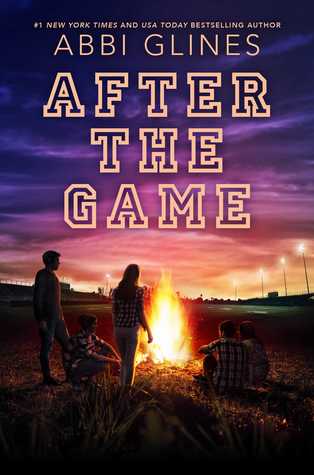 This review may contain spoilers for the first two books in the Field Party series.  If you haven’t read them yet, I suggest you do before picking up After the Game.  I can guarantee you won’t be disappointed in your decision!

I’ve found that the things that rattle us the most are the ones worth making sacrifices for.

Abbi Glines has been a go to author for me for a long time.  I discovered her on the clearance shelves of Books A Million, where I bought the first book in her Seabreeze series.  It’s been true love ever since.  However, that’s not to say I haven’t been disappointed in the last few releases she’s had.  The conclusion to the Rosemary Beach series felt empty to me, and the cross over series between Seabreeze and Rosemary Beach was less than stellar.  I had my fingers crossed that this book would show her true writing skills, and thankfully I wasn’t disappointed.

After the Game, tells the story of Brady Higgens and Riley Young.  Two years ago, Riley was run out of town after accusing Rhett Lawson of rape.  Everyone turned on her including Brady, who she’d grown up with.    But now she’s back in Lawson to take care of her ailing grandmother, and after giving her a ride home in a storm, Brady cannot seem to get her off his mind.  He begins to question everything he ever thought to be true, and finds that Riley may just be the person he’s been looking for his entire life.

This book is definitely my favorite of the series so far.  I knew it would be heartbreaking, but after seeing glimpses of Riley in the first two books, I was really intrigued to know more about her story.  Riley is such a strong female character, and has overcome so much in her life, which is a common theme of Abbi’s female characters.  It’s always nice for me to see her heroines triumph over something that could have devastated their lives.  Instead they rise above it.

Abbi’s writing was super strong in After the Game, and her character development was so much better than in her other books that have been published within the past year.  This is the fourth book that Abbi has published this year (I believe), and it’s been obvious that the rush to publish has been affecting her writing and the quality of the story.  It was so refreshing to see a return to the writing style and quality of the books she published more towards the beginning of her career.

If you’ve never read a book by Abbi Glines before, I highly recommend starting with the Field Party series.  They’re a fun YA contemporary series, that deal with some series real-life problems.