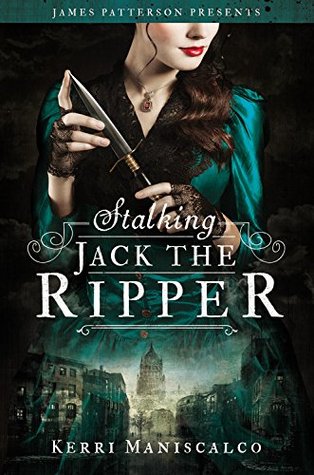 Seventeen-year-old Audrey Rose Wadsworth was born a lord’s daughter, with a life of wealth and privilege stretched out before her. But between the social teas and silk dress fittings, she leads a forbidden secret life.

Against her stern father’s wishes and society’s expectations, Audrey often slips away to her uncle’s laboratory to study the gruesome practice of forensic medicine. When her work on a string of savagely killed corpses drags Audrey into the investigation of a serial murderer, her search for answers brings her close to her own sheltered world.

Roses have both petals and thorns, my dark flower. You needn’t believe something weak because it appears delicate. Show the world your bravery.

Stalking Jack the Ripper (Stalking Jack the Ripper, #1) has been sitting on my TBR for MONTHS now. I decided since it was October and the second book was recently released that I would finally read it. I was so happy I did! I was wary because I am usually (with the exception of Outlander) one who enjoys historical books, but I was not disappointed. This was a Young Adult book, but it was still a scary and chilling take on the infamous Jack the Ripper phenomena.

I have a fascination with serial killers (ahem Criminal Minds anyone??) so I was hooked from page one of this story. I thought Kerri Maniscalco did a terrific job of weaving this tale within the Victorian era of London. It seemed she truly did her research in order to create a plausible tale for who Jack the Ripper was.

I was instantly taken with our main female character, Audrey Rose, because she is viewed as an odd girl through society’s eyes because she wants to cut open cadavers for the sake of science instead of hosting tea parties. Audrey Rose is bursting to be freed from society’s rules and her confidence and sarcasm are great assets of hers. She has an iron will who is determined to uncover the mystery of who Jack the Ripper is. She finds herself even questioning those closest to her and wondering what she would do if they turned out to be this horrific person. She also finds herself drawn to her Uncle’s other apprentice, Thomas, despite her thinking him utterly annoying.

Thomas was a fantastic character. I absolutely adored him and his amazing deduction skills. He would totally be Dr. Reid in this scenario, haha (if you haven’t watched Criminal Minds yet, then you should definitely add it to your list)! Thomas had this quiet way about him, but was not afraid to push Audrey Rose’s buttons. He loved toeing the line with her and pushing her out of her comfort zone. Thomas was the only one who knew that Audrey Rose could take care of herself, and just went along with her as backup. He knew there was no stopping her and it was best to let her do her thing and offer up advice/opinions whether she wanted them or not. He understood her in ways no one ever had, and I loved that about him.

If you have not gathered, I watch a lot of crime shows so I kind of guessed who was going to end up being Jack, but it in no way diminished the story for me. It was still intriguing and there were characters in the book that I just wanted to read more about. I am definitely anxious to read the next installment in this series!

I highly recommend this book if you enjoy: serial killers, gripping tales, historical books, heroines who embrace their oddness, and know-it-all heroes.