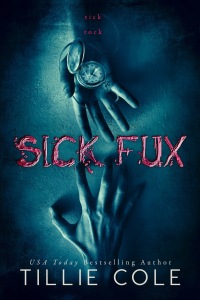 When Ellis Earnshaw and Heathan James met as children, they couldn’t have been more different. Ellis was loud and beautiful – all blond hair, bright laughs and smiles. Heathan was dark and brooding, and obsessed with watching things die.

The pair forged an unlikely friendship, unique and strange. Until they were ripped apart by the sick cruelty of others, separated for years, both locked in a perpetual hell.

Eleven years later, Heathan is back for his girl. Back from a place from which he thought there was no return. Back to seek revenge on those who wronged them.

Time has made Heathan’s soul darker, polluted with hatred and the thirst for blood.

Time has made Ellis a shell of her former self, a little girl lost in the vastness of her pain.

As Heathan pulls Ellis out of her mental prison, reviving the essence of who she once was, down the rabbit hole they will go.

With malice in their hearts and vengeance in their veins, they will seek out the ones who hurt and destroyed them.

One at a time.

Each one more deadly than the last. 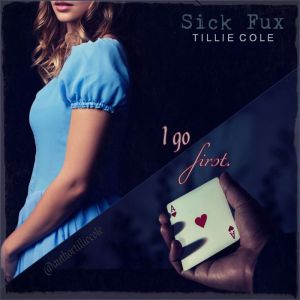 April: Sick Fux is sinister, gruesome, and downright disturbing- and I loved it. It is definitely not for the faint of heart, and even some with strong hearts might find themselves huddled in the fetal position before reaching even 50% through. Still, Tillie has given us one more story to lead the #DarkRomanceRevolution. Viva Le Dark Romance! READ FULL REVIEW HERE!

Charli: Wow! I have been a huge Tillie Cole fan since April introduced me to her Hades Hangmen series a while back. However, this one takes the cake on just how dark dark romance can go. Its heartbreaking and shocking and tests you in ways you can’t even imagine. I absolutely loved Dolly and Rabbit because as fucked up as they are…they work because they have truly been to hell and back together. These two will fight to the death, literally, for each other and there is no one else for either of them. This was definitely a trip to Wonderland I will not forget anytime soon!

Rabbit turned off the country road we were on and pulled onto a dirt path. Bushy tree branches curled above us to create a tunnel. I leaned my head back and caught the last rays of sun slicing through the leaves. When I lifted my head I saw a building up ahead. A house made from wood stood before us.
Rabbit pulled the car to a halt. There were no sounds coming from this house. No screams or crying. Everything was just . . . silent.
Rabbit’s hands slid from the wheel, and without looking at me, he said, “This is where we’ll be staying for the next several days.”
I leaned forward and looked out of the window. “Your home?”
He shook his head. “The first stop on our adventure.” I looked at him and found his silver eyes were already on me. “We have many stops to go.”
My heart fluttered in nervous excitement. “And this is number one . . .” I whispered, more to myself than Rabbit.
Rabbit opened his door. I was still staring at the woods surrounding this place when my car door opened too. Rabbit stood, rabbit-headed cane in hand, waiting for me to leave the car. I swallowed back the nerves that were creeping up my throat and stepped out. The ground crunched beneath my shoes.
“This way.” Rabbit held his arm out toward the house. I fell into step beside him. I glanced all around us, searching for any sign of people. As if reading my mind, Rabbit said, “There is just you and I here for now. We will meet more people when our journey truly begins.”
“It has not begun?”
Rabbit led us to a wooden door and paused. Gripping the head of his cane tighter, he faced me and said, “Soon, darlin’. Before we go, we must prepare.” He opened the door. “But first . . . tea.”
My breath caught in my throat. Beyond the threshold lay the most perfect tea-party spread one ever did see. “Rabbit!” I gasped. My hands flew to my mouth. I took a step forward into the house and onward into the magical room just beyond. As I passed Rabbit I looked up to see him watching me. I moved swiftly to the long table in the center of the wooden-paneled room, and my eyes widened as I beheld the spread. A white tablecloth lay over the table. Tall seats were positioned around it—eight to be exact—and at each seat was set a plate, a teacup and a saucer. I ran my hand over the cloth and smiled at the silver-domed dishes in the center of the table. I looked behind me to find Rabbit, but he was nowhere in sight. Turning back to the table, I lifted the first silver dome to peek at what was underneath. My mouth watered when I saw strawberry tarts. Smiling in excitement, I skipped to the next. Victoria sponge. Desperate to see them all, I removed each cover—cucumber sandwiches, Bakewell tarts, Battenberg cake, carrot cake . . . so much cake! All of England’s finest delicacies.
My favorites.
A floorboard creaked behind me, and I turned to see Rabbit walking back into the room. I opened my mouth to ask him where everything came from, but then I spotted what he held in his hands.
“Tea?” I asked as Rabbit placed the silver tray, which held a teapot, a jug of milk and a bowl of sugar, on the table. I walked closer and closed my eyes as I inhaled deeply. “Earl Grey,” I whispered, smelling my absolute favorite tea in the entire world.
“Only ever Earl Grey for my little Dolly,” Rabbit confirmed and pulled out a chair for me. I sat down, and Rabbit tucked me in. He took the seat a few places down and gestured to the food. “Help yourself. After all, this tea party is in your honor.”
A giddy laugh escaped my throat as I reached forward and carefully selected a variety of cakes and sandwiches. When I had filled my plate, I took the teapot and poured myself a cup. Rabbit watched me with a peculiar look on his face. His lip was hooked at the corner, and his eyes were . . . soft. His eyes were never soft, always hard and focused, but as he looked at me now, they were almost gentle.
I swallowed, unsure what this strange feeling in my stomach was. I pressed my free hand to my stomach as a comfort against the strange tingling sensations inside. “Tea?” I offered, my voice barely above a whisper.
Rabbit nodded; not a word escaped his mouth. His gaze became more intense as I moved beside him and poured the steaming liquid into his cup. As my arm neared him, I felt him stiffen in his seat. Only a sliver of air prevented our limbs touching. His breathing grew labored as he watched me pour.
But we didn’t touch.
Clearing my throat, I placed the teapot back on the tray and moved to take my seat once again. Just as I took a step, an image floated into my head. Of me and Rabbit. Lips touching. My entire body tensed.
I heard Rabbit’s ragged breathing behind me. Goosebumps broke out along my body, chasing one another up my arms and up to the back of my neck. Shaking my head clear of the image, I sat back down.
I raised my eyes and found Rabbit watching me intensely. I lifted my teacup toward my lips. Rabbit did the same, but just as the lip of the teacup almost reached his mouth, I shouted, “Rabbit!” He froze. “Your little finger!” I scolded. I lowered my cup and shook my head. “You cannot drink tea without raising your little finger, silly!”
Rabbit exhaled, then bowed his head. “You’re right, darlin’. How could I forget?”

Tillie Cole hails from a small town in the North-East of England. She grew up on a farm with her English mother, Scottish father and older sister and a multitude of rescue animals. As soon as she could, Tillie left her rural roots for the bright lights of the big city.

After graduating from Newcastle University with a BA Hons in Religious Studies, Tillie followed her Professional Rugby player husband around the world for a decade, becoming a teacher in between and thoroughly enjoyed teaching High School students Social Studies before putting pen to paper, and finishing her first novel.

Tillie has now settled in Austin, Texas, where she is finally able to sit down and write, throwing herself into fantasy worlds and the fabulous minds of her characters.

Tillie is both an independent and traditionally published author, and writes many genres including: Contemporary Romance, Dark Romance, Young Adult and New Adult novels.

When she is not writing, Tillie enjoys nothing more than curling up on her couch watching movies, drinking far too much coffee, while convincing herself that she really doesn’t need that extra square of chocolate.
Author Links