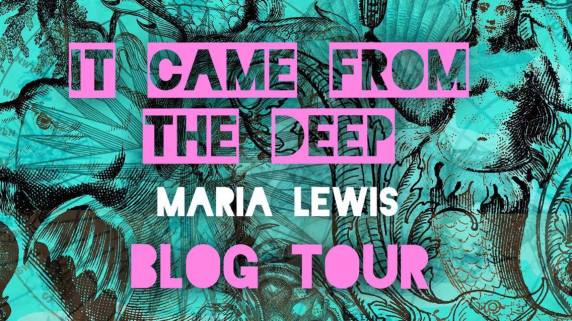 When I heard that Maria Lewis was releasing a NEW novel, to say I was excited is an understatement. I became aware of this hidden gem of Australian talent last year when she unexpectedly popped onto my radar (thanks Bookstagram!) and since I have been an avid follower and fangirl.

Her first book, Who’s Afraid?, was one of my underrated favorites of 2016 and I often recommend it to anyone who is looking for a fast paced, kick ass. urban fantasy/paranormal story with a fun, strong female lead.

It Came From The Deep, Lewis’ third novel in under two years, is a science-fiction mystery set on the Gold Coast and promises to “plunge readers into surf life saving.”

“I’m a massive fangirl and consumer of Young Adult Fiction and have always wanted to write something in that world, but I’ve just been waiting for the right story,” she said. “It Came From The Deep is that story, and my twist on The Little Mermaid meets Creature From The Black Lagoon.”

An elderly professor is murdered, leaving a puzzling crime scene for police to
unravel and a laboratory housing all kinds of marine life. But something is
missing … something huge.

Recent high school graduate Kaia Craig has problems of her own, with her
career as an iron-woman on the Gold Coast in jeopardy after a horrific
accident. Yet someone wants to hold her accountable.

After nearly drowning in Lake Pelutz and her attackers on the run, Kaia is left
with more than just physical injuries. She’s convinced she saw something in
the depths of the lake: something that choose to spare her.

Uncertain whether she’s running towards the discovery of a friend or foe, Kaia
begins digging into a mystery that may have bigger ramifications than she or
any of her friends can fathom.

Recently, I have had a growing obsession with music that inspired novels or music inspired by novels, so when Maria told me there was an It Came From The Deep playlist, I knew I had to have it, and then share it with you. I still cannot listen to anything but silence while reading, but I love to listen after  finishing the story (sometimes over and over) as a way of reliving it through a different sense. In fact, I’ve been listening to this one while writing tonight, and jamming the fuck out.

Check out the rad playlist here:

It Came From The Deep releases EVERYWHERE e-pubs are available, on Tuesday, October 31st

(this means NO WAITING for us here in the States!)

GET A COPY
Amazon US
Amazon AU
Amazon UK

Look for my review later this week!

ABOUT THE AUTHOR
Maria Lewis is an author, journalist and screenwriter based in Sydney, Australia. Getting her start as a police reporter, her writing on pop culture has appeared in publications such as the New York Post, Guardian, Penthouse, The Daily Mail, Empire Magazine, Huffington Post and many more. Seen as a presenter on SBS Viceland’s nightly news program The Feed and as the host of Cleverfan on ABC, she has been a journalist for over 13 years.  Lewis is also the producer and host of the Eff Yeah Film and Feminism podcast. Her critically acclaimed debut novel Who’s Afraid? was published in 2016, followed by its sequel Who’s Afraid Too? in 2017. Who’s Afraid? is being developed for television by the Emmy and BAFTA award-winning Hoodlum Entertainment.