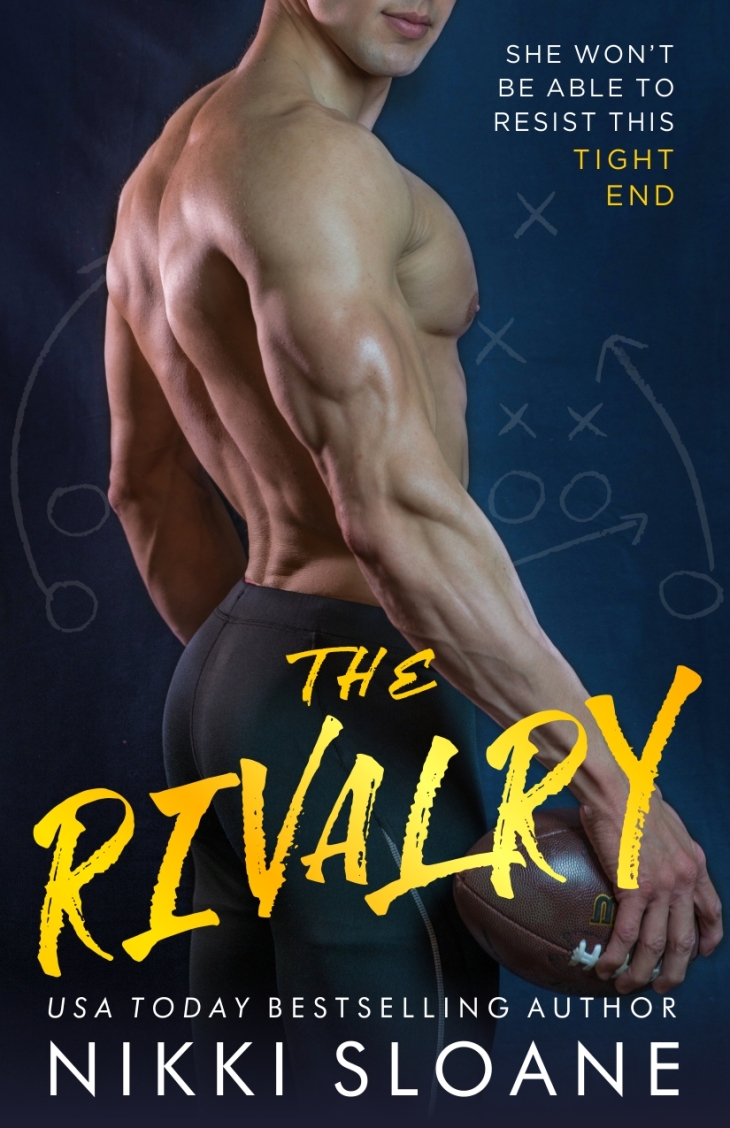 This tight end is at the top of his game.

He’s good with his hands, even better with his sexy mouth, and the best at making me forget my own name. His, ahem, stats are perfect.

But I can’t fall for him.

He might be everything I want, all rolled into a glorious package of gridiron god, but there’s one teeny-tiny problem. The vile, loathsome team I’ve spent my entire life hating—my beloved school’s arch-rival?

This guy is their star player.

This was my first Nikki Sloane book and it was pretty good! The Rivalry is a new adult sports romance centered around the Michigan and Ohio State football rivalry. I LOVE sports romance, especially football sports romance.

Kayla comes from a die hard Ohio State family who becomes the Ohio State cheerleading captain her senior year. She is a bridesmaid at a friend’s wedding when she meets Jay, but has no idea he is a tight end for Michigan. They click so easily together, however, bombs explode in Kayla’s world when she figures out who he is.

Jay is from Indiana so he doesn’t buy into the rivalry as much as Kayla does, but he has his work cut out for him when he realizes just how much Kayla hates his school. He is determined to get her to see past the rivalry because he wants a chance with her.

This was such a fun, quick read! I literally read it in about five hours because I wanted to see how things would work out between Jay and Kayla. I loved these two together and Kayla was so passionate about football. Aside from the major roadblock of two opposing schools, Kayla and Jay fit so easily and sweetly together.

I went into The Rivalry knowing nothing about it.  I requested the ARC because it was a sports romance, and I liked the cover.  So imagine my surprise when within the first few pages, I realized this book was about an OSU cheerleader and a Michigan football player.  For those of you that don’t know, I’m a born and bred Ohio girl and we bleed scarlet and gray, and we loathe Michigan fans.  This rivalry is cultivated in us from the time we are little, and heaven forbid we ever cross into the dark side and like anything from Michigan!

This book was so much fun!  Nikki Sloane did a great job of getting the emotions right between the two schools, and did it in a way that was both funny and refreshing.  There were several moments between Jay and Kayla that had me laughing out loud.  The banter between these two characters was really well written and kept the story moving at a really good pace.

Iloved this book from the very first page, all the way to the epilogue.  I smiled.  I laughed.  And if I’m being completely honest, I might have gotten a little weepy at one point.  This book just had everything I love about a sports romance.  I got swept up into the emotions of the game, and felt like I was right there in the stands watching!

Nikki Sloane landed in graphic design after her careers as a waitress, a screenwriter, and a ballroom dance instructor fell through. For eight years she worked for a design firm in that extremely tall, black, and tiered building in Chicago that went through an unfortunate name change during her time there. Now she lives in Kentucky and manages a team of graphic artists. She is a member of the Romance Writers of America, is married with two sons, writes dirty books, and couldn’t be any happier.