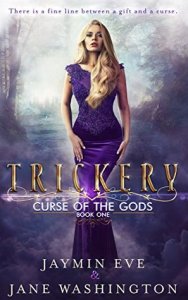 “It’s your own fault, Will. What did I tell you about walking?” “That I should leave it to the experts,”

In Minatsol, being a dweller means that you are literally no better than dirt. In fact, dirt might actually be more useful than Willa. Her life will be one of servitude to the sols, the magic-blessed beings who could one day be chosen to become gods.

At least her outer village is far removed from the cities of the sols, and she won’t ever be forced to present herself to them… Until one small mistake changes everything, and Willa is awarded a position to serve at Blesswood, the top sol academy in the world—a position that she definitely did not earn.

Under the sudden, watchful eye of the gods, she will be tasked to serve the Abcurse brothers, five sols built of arrogance, perfection and power. They are almost gods themselves, and under their service she is either going to end up sentenced to death, or else they are going to ruin her so badly that she will wish for it.

Either way, she is in trouble.

O.M.G. This series was beyond addicting! I have read Jaymin Eve before and loved her books, but she partnered up with fellow author, Jane Washington, this time to make a stunning series. I literally read all 3 books (which are on Kindle Unlimited btw) in 3 days. One of these nights I was up until 6:15 IN THE MORNING to finish. Good thing I am on Christmas break!

The Story. The Curse of the Gods series is a new adult reverse harem paranormal romance that keeps your ass glued to the couch until you are done with the series. I love reverse harem books because I love reading about the heroine’s relationship with each of the heroes. They are all so different and it’s fun to see them all grow together. Yes, the romance is unconventional, but it is oh so good. The story was very well written and definitely kept you entertained. Although, there were a few very predictable things that happened, but I honestly just didn’t care…I was too absorbed in the series. I am a sucker for mythology as well and this book had that in spades. There were gods cursing people and sols impersonating people and dwellers starting a rebellion somewhere in there.

Willa. This girl get me giggling from beginning to end. Willa is such an entertaining heroine who can’t even walk across a flat surface without tripping over something or going down the stairs without tumbling down them. Generally, when she walks into a room something will happen. She is the epitome of drama queen too when she gets started on one of her tangents, haha. She is hilarious and I loved being in her head. She doesn’t like restrictions or people telling her what to do. So when someone tries to tell her what to do, be ready to expect anything. Willa has a tough exterior that she hides with false bravado so when five guys worm past her shell…she is in for the ride of her life.

The Relationships. I need a fan over here because the sexual tension among this group is palpable. I do have a couple favorites (I am looking at you Coen and Rome), but I can say that I honestly love all five of them. Each of these sexy AF brothers (yes they are brothers but its not weird…I promise) has a gift. Coen is pain, Rome is strength, Aros is seduction, Yael is persuasion, and Siret is trickery. Along with these gifts, they each come with their own personality that makes this group so fun to read about. No one has ever made it into their tight knit circle so when Willa trips, literally, into their world…they are in for something that they never expected. The fierce loyalty in this group is admirable. There is no high school drama in this series, which I am thankful for. All of the guys are written about equally in this series, even though each book is titled after one of their gifts. I was happy to find that out because I couldn’t take one book being all about one guy. I NEED them all equally just as much as Willa does.

I am counting down the days for Strength and Pain to release! I highly highly highly recommend this series to those who love: reverse harem romance, paranormal, mythology, clumsy, defiant heroines, and protective, sexy heroes.