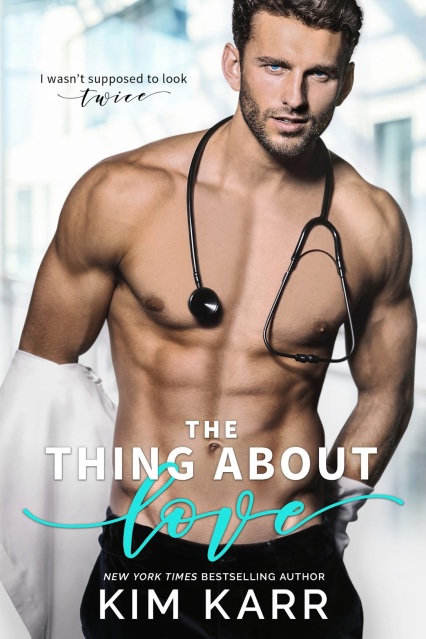 Title: The Thing About Love

Blurb
The whole stethoscope-and-white coat thing isn’t my cup of
tea.
I prefer a man with an artistic vein in his body. 9 – 5 hours. And I
can definitely do without the half-lidded, sleepy bedroom eyes. (Okay, so
those are kind of sexy.)
Tall, dark, and handsome doesn’t change the fact that he’s arrogant,
cocky, and rude.
Not that I care, but he’s made it clear he wants nothing to do with a
quirky girl like me, which is why he said no.
Turns out no isn’t an option.
I have a quickie wedding to plan, and Dr. Jake Kissinger doesn’t have a
choice. He looks at our situation like he’s stuck with me, but in reality, I’m
stuck with him. Stuck with his pouty mouth. His long, lean body. And stuck with
those loose, low riding scrub pants. (Okay, so the doctor thing is growing
on me.)
When spending time together turns into more than it should, I know I’m
in trouble.
He isn’t supposed to make my heart pound.
I’m not supposed to make him look twice.
And we aren’t supposed to spend the night together. (Okay, so he has
more than one artistic vein in his body, and other places.)
Falling for him is definitely a mistake.
Here’s the thing…
Jake is unavailable, and I know it.
Just not in the way you might think.
I guess
you can’t have your cake and eat it too.

The Thing About Love is the second Kim Karr book that I have read and loved! This is a book so sugary sweet that it gave me a tooth ache in the best way. The love in this book was overwhelming and perfect!

The Story. The story opens up with Juliette Easton, a wedding planner, trying to impress a bride in order to save her business, but her impulsiveness leads to catastrophe before she even meets the bride. Karr is well known for writing unconventional first meetings that leave you laughing so hard, which is exactly what happened in this book. Juliette finds herself planning a bride’s wedding with the bride’s asshole brother, Jake. She can’t stand him, but her traitorous body can’t get enough of his charming, sexy personality. They both know it can’t last beyond the wedding date, but they don’t care. They both find themselves fighting an impossible bond when their pasts are revealed and they can’t stay away from each other. I loved the plot and the characters and this was very well written. Mimi was my favorite side character out of the bunch, but I can’t wait for Jaxson and Finn’s stories! The Thing About Love just made my hopeless romantic heart so freaking happy because there were so many happily ever afters in this book and beautiful moments that made me tear up. The southern culture in the book was also fun to be immersed in.

Jules. Jules was a fantastic character who grew so much in this book. I loved her sassy, adorable self who wasn’t gonna let a man walk all over her. Jules grew up watching her parents have the unending love she wants in her own life. However, when she loses her parents tragically, she is scared to want what they had. Being surrounded by love as a fledgling wedding planner, she is missing a key part of what makes a wedding planner successful. She doesn’t understand what love is and when Jake turns her world upside down…she figures out that love might be coming for her whether she want it or not.

Jake. Oh Jake. He is one sexy mofo who protects and saves people for a living while wearing scrubs, which undoubtedly only look good on a small number of people. Jake is determined to follow in his dads footsteps whether it hurts those he loves or not. He is counting down the days to marry his sister off before he moves to New York to work in the same hospital his dad worked at. Jake is terrible at goodbyes and is struggling with the impending death of his grandmother. The grandmother who raised him and his sister from a young age. Jake’s past is another tragic one, but it is what ultimately brings Jules and Jake together.

I highly recommend this book to those who love sweet romances, tragic pasts, character depth, impulsive heroines, and protective heroes.

Her characters will make you laugh, make you cry, make you feel.

And her happily-ever-afters are always swoon worthy.

From the brooding rock star to the arrogant millionaire. From the witty
damsel-in-distress to the sassy high-powered business woman. No two storylines
are ever alike.

Get ready to fall in love.