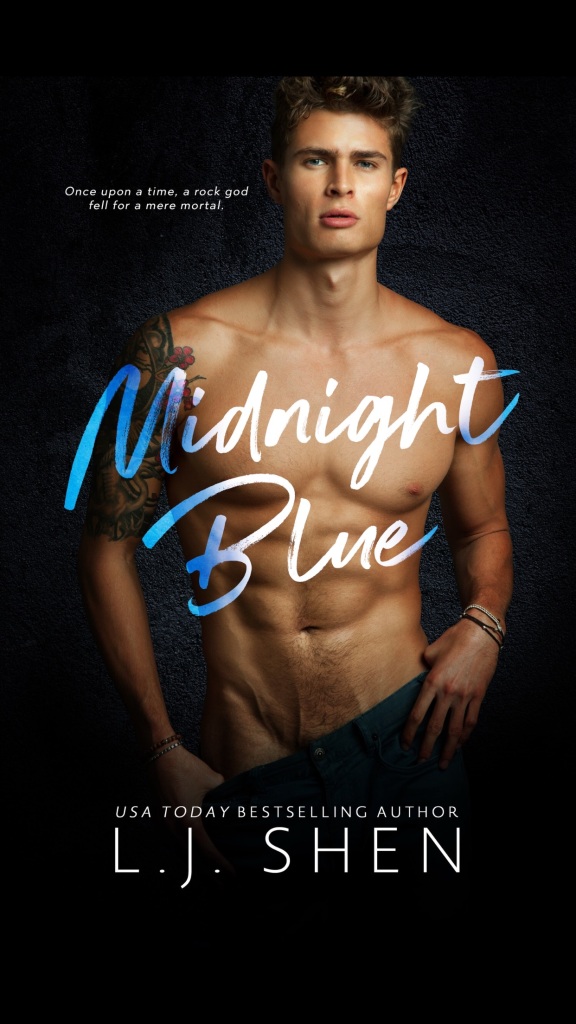 It should have been easy.
I needed the money. He needed a babysitter to keep him from snorting himself to death.
I was cherry-picked especially for him. Responsible. Optimistic. Warm. Innocent.
The worst part is that I should have known better.
Alex Winslow. British rock star. Serial heartbreaker. Casanova with whiskey eyes.
“Don’t get near the devil in a leather jacket. He’ll chew you up and spit you out.”
Guess what? I didn’t listen.
I signed the contract.
World tour. Three months. Four Continents. One hundred shows.
My name is Indigo Bellamy, and I sold my soul to a tattooed god.
Problem was, my soul wasn’t enough for Alex Winslow. He ended up taking my body, too.
Then he took my heart.
Then he took my all.

I finished this book earlier in the week, and I’ve put off writing a review because I honestly couldn’t think of anything to say except “OMG Alex is amazing and awesome and this book is life.” A few days later, I still 100% agree with that statement, but I think I can at least add a few more coherent sentences to those thoughts.

I discovered L.J. Shen late last year when I read her Sinners of Saints series, which is absolutely amazing in its own right and one of my favorite romance series. In October she started teasing a super secret project she was working on, and to say the least I was intrigued! Slowly, she introduced us to Alex and Indie, and by the time Midnight Blue was set to release I was on pins and needles waiting for the release. And it did not disappoint.

Alex Winslow is a British rocker whose life is falling apart. He’s been arrested, gone through rehab, and lost his fiancé to his former best friend. His soul is tortured to the point that he no longer knows himself. He’s crass, rude, and plain nasty. He’s pushed his friends away, and basically marooned himself on an island alone with his broken soul. Indie is hired to “babysit” him on his tour and to keep him away from drugs and alcohol. Despite Alex’s attempts to push her away, Indie is determined to see the tour through to save her family from the hard times they’ve fallen into.

Eventually Alex begins to see something in Indie, and she becomes the inspiration for his newest album.

“I’m going to take what’s inside you and put it in my notebook, because I’m empty and you’re full.”

The two spend nights together outside their hotel room, always at midnight, and it is during these sessions that both Alex and Indie seem to let each other in. Eventually the late night sessions between the two lead to so much more and I was pretty sure my Kindle was going to combust with the amount of heat and feelings these two characters produced.

“His touch was like a blanket. Warm and oddly protective. My body felt like a phoenix rising up from the ashes of dormancy and rediscovering it had muscles, and nerve endings, and flesh that craved to be touched and bitten and nipped at.”

L.J. Shen created a novel that tugged at my heart strings, broke my soul, and managed to put it all back together again among its three hundred and some pages. As I was reading, I felt like I was highlighting every other line of this books. The words were absolute magic and Shen drew me in, wrapped me up, and then spit me out a tear stained mess that hasn’t stopped thinking about these characters for days. The ending of this story was absolutely stunning and I loved these characters with my whole heart.

Midnight Blue is Shen’s best work to date and deserves all of the fanfare and accolades in the book community. I can’t wait to see what she comes up with next because she has yet to dissapoint me!

“This is our tour. Our album. Our soul.”

Let me start this review by saying that I have read Shen’s books before, but this one is THE BEST book she has written to date. I can always tell it is Shen who is writing because she has a distinct way of making even the biggest assholes into something so much more, which is exactly what happened with Alex. I will forever support Shen because she has yet to fail me.

The Story. The story begins with Indie desperately trying to find a job to help support her family who are barely staying above water. She is willing to try anything…even babysit an asshole rocker in need of clean image. Alex is fresh out of rehab and looking to redeem himself after his last album flopped and his fianće left him for his best friend. He is expecting to just keep running off these babysitters that his agent keeps assigning him, but is flabbergasted when Indie dishes back whatever he throws her way. He quickly realizes that Indie is there for the long haul no matter how nasty he can get. However, the more time he spends with her, the more he realizes that she is his muse and his soul to writing the best album he has ever written. He sits in the hall at midnight with Indigo “Stardust” Bellamy and her blue hair and her blue eyes, and he listens to her story. As what they have starts to turn into something more, outside forces take the rug out from under them, and they will have to decide if what they have is worth fighting for.

This was a beautiful story about two tortured souls who go through hell to find each other. I was fully immersed in this world and these characters. The loyalty inspired throughout is courageous and sometimes so very sad. It was very well written and had an amazing sense of depth to it. These two wore masks for the world, but would let them down with each other. That was when they were at their most beautiful. I went through a whole gamut of emotions while reading this book, but the one I clung to the most was hope. I could have read another 500 pages on these two and I still wouldn’t have enough of them.

Indie. Indie is not your typical female character. She has blue eyes, a strange name, blue hair, and likes to make her dresses in fabrics and eras from the past. She is willing to do anything to pay back her brother and his family for taking her in when tragedy struck. She is loyal and is not willing to let anyone walk over her…not even a sexy, British rocker. She wasn’t willing to settle for anything less than she deserved.

Alex. Alex was the true star of this book for me. On the surface, he is the biggest asshole who doesn’t give a fuck, but he has the most beautiful soul. I fell in love with him, Tania, and his music. It was truly a work of art. He found his muse inside a girl’s soul whom he never would have expected to fall in love with.

The ending, especially that epilogue, was beyond perfect. Hats off to you LJ Shen for this masterpiece you have brought us. I highly recommend this book to those who love: music, beautiful stories, strong heroines, and redeemable heroes.