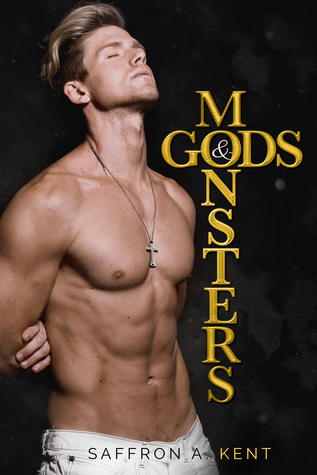 He was an artist. She was his muse.

To everyone in town, Abel Adams was the devil’s spawn, a boy who never should have been born. A monster.

To twelve year-old Evie Hart, he was just a boy with golden hair, soft t-shirts and a camera. A boy who loved taking her picture and sneaking her chocolates before dinner. A boy who made her feel special.

Despite her family’s warnings, she loved him in secret for six years. They met in empty classrooms and kissed in darkened church closets. Until they couldn’t.

Until the time came to choose between love and family, and Evie chose Abel.

But the thing about legends is that they are cautionary tales. They are made of choices and mistakes. And for Abel and Evie, the artist and the muse, those mistakes come in the form of lights, camera, sex.

NOTE: This is NOT a paranormal or a priest romance.

Saffron A. Kent has been on my TBR now for ages, so I was excited to finally sit down and read one of her works.  Gods and Monsters is a coming of age story between Evie and Abel.  Evie is growing up in a very conservative town, where Abel is not accepted and is considered the town “monster.”  Before he was ever born, his parents were run out of town and their sins became his.  Evie’s mother, especially, is completely against her having any type of relationship with Abel and warns Evie against him again and again.  Though forbidden to see him, Evie refuses to listen and soon a secret, but deep love forms between the two.

I liked our main characters to a point, but definitely had some issues with both.  Obviously they both came from a deeply troubled past, and that definitely came to light as the story progressed farther and farther.  There were also so many things that Abel hated about Evie’s mother, but I felt he projected those same feelings toward her, just in a different way.  I struggled to reason with a lot of the situations in my mind, and that slightly took away from my enjoyment.  I also felt a little bit of a disconnect between Part 1 and the beginning of Part 2, but thought it came together towards the end.  A lot of elements of this book just shocked me, which I guess is a good thing, because after reading as much romance as I have, it takes a lot to leave me reeling.

Despite some of my misgivings with the characters, Saffron’s writing is absolutely amazing.  She has a way of expressing feelings with her words that left me stunned and speechless.  The writing was so well done, and it’s the reason I’ll be reading her other books.  I’m also curious to see if they’re along this same vein of darker, erotic fiction.  This is definitely not a romance for the light of heart.  It’s gritty, dark, dangerous, and chocked full of angst.  The romance weaves its way through these dramatic elements, in a way that Is absolutely brilliant.  Saffron’s writing shines among these pages.

Saffron is a big believer in love (obviously). She believes in happily ever after, the butterflies and the tingling. But she also believes in edgy, rough and gutsy kind of love. She believes in pushing the boundaries, darker (sometimes morally ambiguous) emotions and imperfections.

The kind of love she writes about is flawed just like her characters. And she hopes by the end of it, you’ll come to root for them just as much as she does. Because love, no matter where it comes from, is always pure and beautiful.

She is represented by Meire Dias of Bookcase Agency