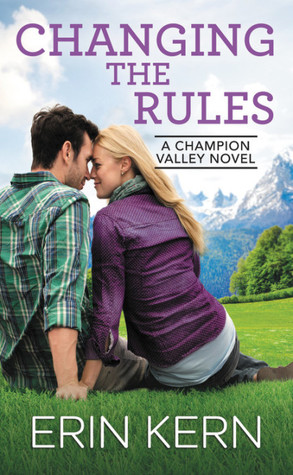 This alpha athlete is about to meet his match…

Cameron Shaw knows exactly what he’s doing when it comes to coaching high school boys on the football field, but caring for a six-year-old girl is a whole different ballgame. When a gorgeous, highly opinionated woman shows up with his niece in tow and claims he’s Piper’s new guardian, Cameron’s first response is “hell no.” But he can’t abandon a little girl who just lost her mother….

Audrey Bennett wasn’t planning to stick around town, but Piper’s gruff, way-too-good-looking-for-his-own-ego uncle clearly needs help. The longer she stays-watching Cameron teach Piper to make pancakes and tie her sparkly pink shoelaces-the harder it is to leave. Especially when he stops arguing and gives Audrey the most toe-curling kiss of her life. But just as she thinks he might be the one, a secret he’s been keeping threatens to tear apart their happy little family.

This was such an adorable, light, easy read that Erin Kern has provided us with. Changing the Rules is the third book in her Champion Valley series, but it is a complete standalone. I have not read the first two books and I was able to thoroughly enjoy this one.

Cameron Shaw does not expect to become the guardian of his niece, Piper, whom he has never met. He refuses to take in Piper because he has no idea what he is going to do with a kid, but there is no way in hell Audrey is letting him skip out on his only sister’s dying wish. Audrey just needs to convince him that he can be the guardian Piper needs and finds herself living in his guesthouse along with Piper. It is a learning curve for everyone as Cameron struggles to find a connection with Piper while ignoring his growing feelings for Audrey. Audrey struggles with the idea of letting go of Piper while protecting herself from Cameron because she has learned the hard way that people don’t always stick around. Piper struggles with settling into a life with an uncle she has never met while still grieving over the mother she lost.

This was a joy to read because they were a perfectly imperfect family unit that were finding their way through life as they went. Cameron and Audrey are both control freaks, which makes for a dew interesting nights in the kitchen. Piper was freaking adorable. I loved her resilience and her positivity. This was a pretty quick read that was very well written.

I recommend this book for those who love: adorable six year olds, two Type A personalities, an alpha athlete, and a heroine who names designers alphabetically when she needs a breather.