Ok I’m super excited for this post because Pride Month is something that is so special to me, despite the lack of rainbow-themed anything in my house. It just doesn’t go with my overall sense of decor ok? It’s not my fault. Rainbows aren’t cozy and wintry everyone knows this. It’s been so fascinating to me seeing everyone’s picks and how different we all are and how our books range from being entirely about someone’s LGBTQ+ identity to great rep but the story revolves around a murder or a school for assassins. My picks are all on the latter part of the spectrum and I can’t wait to share them with you because I love all of these books.

The most terrifying thriller you’ll read this year

It starts with just one body – the hands bound, the skin covered in marks.

Detective Superintendent Jeanette Kihlberg is determined to find out who is responsible, despite opposition from her superiors. When two more bodies are found, it becomes clear that she is hunting a serial killer.

With her career on the line, she turns to psychotherapist Sofia Zetterlund. Together, they uncover a chain of shocking events that began decades ago – but will it lead them to the murderer before someone else dies?

Ok this book honestly deserves all the warnings it gets about content, because it is about truly horrifying aspects of human psyche. I can tell you all the trigger warnings if you need me to, but this book is hands down one of the best I’ve ever read. It is clinical and analytical and fascinating and I have never binged such a huge book so easily.

One of the things I love so much about this book is how easily it depicts an LGBTQ+ romance in the midst of the terrors of the crimes being committed and investigated. The relationship is a huge part of the book because of the psychological effects it has on those within it, but never does it act like the relationship is a big deal because it is between two women. It is simply a big deal because these are two highly intelligent experts in their respective fields working on the same case.

If you’re looking for fluffy contemporary about LGBTQ+ couples, this is clearly not the book for you. But if you want a chilling, gripping, Scandinavian crime fiction novel that you won’t ever want to put down and you’ll rave about for the rest of time, this is for you. It’s amazing and a total mindfuck and my favorite thing right now is getting text updates from Bee and Maisa that all basically say “WHAT THE FUCK IS GOING ON”. Seriously the best part of reading this book.

In a land where three suns almost never set, a fledgling killer joins a school of assassins, seeking vengeance against the powers who destroyed her family.

Daughter of an executed traitor, Mia Corvere is barely able to escape her father’s failed rebellion with her life. Alone and friendless, she hides in a city built from the bones of a dead god, hunted by the Senate and her father’s former comrades. But her gift for speaking with the shadows leads her to the door of a retired killer, and a future she never imagined.

Now, Mia is apprenticed to the deadliest flock of assassins in the entire Republic—the Red Church. If she bests her fellow students in contests of steel, poison and the subtle arts, she’ll be inducted among the Blades of the Lady of Blessed Murder, and one step closer to the vengeance she desires. But a killer is loose within the Church’s halls, the bloody secrets of Mia’s past return to haunt her, and a plot to bring down the entire congregation is unfolding in the shadows she so loves.

Will she even survive to initiation, let alone have her revenge?

This trilogy (or the two installments so far because Jay delights in torturing his readers by pushing out the Darkdawn publishing date) is one of my absolute favorite LGBTQ+ because of its bisexual rep. Again, these books don’t really make a big deal about it. In the school for assassins, one of the things the students are schooled in is pleasure and there is no differentiation between the gender of the students, the female master tutors them all. I love it. Mia Corvere is bisexual but it never comes out and trumpets it from the rooftops, it is simply an aspect of her identity that continues to be explored throughout the books.

I really don’t want to say too much because spoilers are the devil but even without the stellar representation I would recommend this book for some of the most impressive worldbuilding known to man, insanely badass characters, good smut, lots of blood and gore, and plenty of profanity.

Ketterdam: a bustling hub of international trade where anything can be had for the right price–and no one knows that better than criminal prodigy Kaz Brekker. Kaz is offered a chance at a deadly heist that could make him rich beyond his wildest dreams. But he can’t pull it off alone…

A convict with a thirst for revenge.

A sharpshooter who can’t walk away from a wager.

A runaway with a privileged past.

A spy known as the Wraith.

A Heartrender using her magic to survive the slums.

A thief with a gift for unlikely escapes.

Six dangerous outcasts. One impossible heist. Kaz’s crew is the only thing that might stand between the world and destruction—if they don’t kill each other first.

I feel like everyone and their mother has read these books but that doesn’t change the fact that Nina Zenik is my bisexual queen and I adore her to absolute pieces. My favorite part about these books is that Nina’s sexuality is clear the entire time and is flawlessly woven into her identity, and there is absolutely no big deal made out of the fact that she’s in love with a man. Something I tend to struggle with when it comes to bisexual rep is the expectation and pressure for the character to be with a same-sex partner in order for their sexuality to be legitimate, and this book illustrates that mentality as the nonsense it is.

Also, let’s be honest, books about heists are the shit. Not to mention squabbling characters who adore each other and are mostly too tough to show it, plenty of ethnic diversity, and a lot of dark backstories. These books are the trifecta. 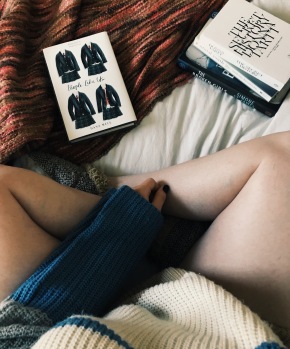 Kay Donovan may have skeletons in her closet, but the past is past, and she’s reinvented herself entirely. Now she’s a star soccer player whose group of gorgeous friends run their private school with effortless popularity and acerbic wit. But when a girl’s body is found in the lake, Kay’s carefully constructed life begins to topple.

The dead girl has left Kay a computer-coded scavenger hunt, which, as it unravels, begins to implicate suspect after suspect, until Kay herself is in the crosshairs of a murder investigation. But if Kay’s finally backed into a corner, she’ll do what it takes to survive. Because at Bates Academy, the truth is something you make…not something that happened.

Yayyyy another murder mystery! Can you tell I love them? This is another psychological thriller, but without all of the gore and super dark subject matter of The Crow Girl. This one is YA and also has amazing bisexual rep (which I’m realizing now that literally all of my choices have bisexual rep), while being super twisty turny and creepy. Plus, it’s dark academia which is basically my favorite thing.

This is a rare book for me in that the main character is bisexual and harbors feelings for a boy and a girl throughout the whole book. I really enjoyed this aspect of it since it was so in the present and it felt so equalizing. There was no pros and cons list of boy vs girl, she just cared about these people equally and in subtly different ways regardless of gender and I loved that.

Also, this is legitimately a really well done thriller that had me constantly guessing. It’s super cozy and takes place in the East Coast during October and November. Basically the ultimate spooky fall read.

I’m honestly really fascinated by the similarities in the books I chose but I hope you really like them and maybe add a couple of them to your TBR if you have yet to pick them up. These books are all some of my absolute faves and such fun reads. Happy Pride Month to all of you!