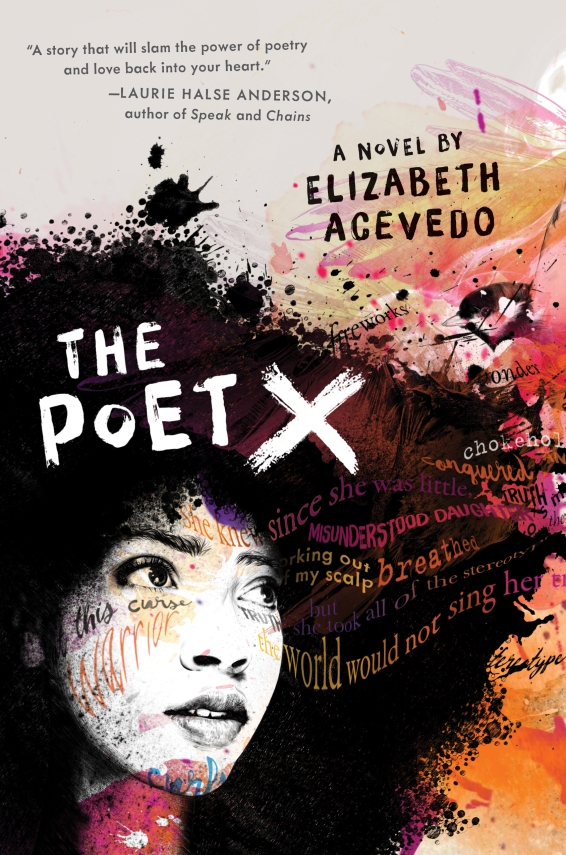 A young girl in Harlem discovers slam poetry as a way to understand her mother’s religion and her own relationship to the world. Debut novel of renowned slam poet Elizabeth Acevedo.

Xiomara Batista feels unheard and unable to hide in her Harlem neighborhood. Ever since her body grew into curves, she has learned to let her fists and her fierceness do the talking.

But Xiomara has plenty she wants to say, and she pours all her frustration and passion onto the pages of a leather notebook, reciting the words to herself like prayers—especially after she catches feelings for a boy in her bio class named Aman, who her family can never know about. With Mami’s determination to force her daughter to obey the laws of the church, Xiomara understands that her thoughts are best kept to herself.

So when she is invited to join her school’s slam poetry club, she doesn’t know how she could ever attend without her mami finding out, much less speak her words out loud. But still, she can’t stop thinking about performing her poems.

Because in the face of a world that may not want to hear her, Xiomara refuses to be silent.

A lot of people don’t know this, but back when I was in high school, I was very involved in the slam poetry and performance poetry movement.  We had several local coffee shops and bookstores that had slam poetry nights, and I was often there, nursing a cup of coffee, either participating or watching the other poets and learning ways that I could make myself better.  I was the driving force behind the slam poetry club at our high school, and ran it all four years I was there.  I loved every minute of it.  As I grew older, and went to college, my time was taken up with other things like studying, intramural sports, and dating…I know, right?  Now some 18 years out of highschool, it’s been close to two decades since I graced the stage of a slam poetry night, but those feelings that it evoked never truly leave you.

The Poet X is a book that I looked at for months on the Target shelves and just kept putting it back.  I was interested, but didn’t know when I’d have a chance to read it, and just didn’t want to spend the money for a hardcover that I would either read in a few hours, or would collect dust on my shelf for months and months.  My plan was to borrow it from the library, and read it that way.  However, when I saw the audio pop up on Scribd, I decided to give it a go.  And it was, hands down, one of the best book decisions I have made this entire year.

The Poet X is read by the author, Elizabeth Acevedo, and in my opinion, the audio is the only way to go with this book.  Her reading is so incredibly powerful, and the words fly off the page and hit you right in the gut.  I didn’t just hear her reading the words, I felt them down to my very soul.  Her voice, her inflection, her very demeanor is everything you look for when listening to slam poetry.  It was absolutely awe inspiring.  Acevedo took a story about growing up and finding yourself, and turned it into something magical.  There were times I had to stop the audio just so that I could take a minute to really let her words sink in.  I rewound her voice, replaying my favorite verses again and again.  Overall, I’ve listened to the audio now three times.

The Poet X is a story about hope, and life, and growing up.  It’s a story about learning who your true self is, even if it’s not one that everyone will agree with.  It’s about having a voice, and making sure that your voice is heard.  For me, Xiomara was more than just a character in a book.  Even at 36, I related to her in a way that went beyond the words on a page.  I saw my struggles to find out who I really was among the pressures of family, life, and friends reflected back to me in every word, stanza, and page.

Since finishing The Poet X on audio, I have gone out and bought it in hardcover, and it sits proudly on my shelf.  But honestly, I don’t regret not buying it sooner.  Because if I had, I would have missed out on Acevedo’s voice, and her performance, and it’s truly something that needs to be heard.  Her next book, With the Fire on High releases in May 2019 and I can only hope that she’ll be doing the audio for it too, because I need more of her in my life!