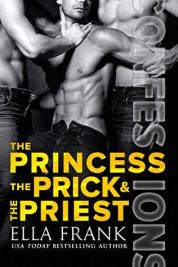 Relationships are complex.
Love ever-changing.
And when it comes to rules of the heart,
they were made to be broken…

That’s what Robert Antonio Bianchi was telling himself, anyway.
Otherwise, he really had no excuse for what—or who—he’d done.

No excuse, except for his lonely heart, a pitcher of margaritas, four Bitter Bitches, and the apparent need to confess all his weaknesses to the two men he knew would bring him nothing but trouble.

But trouble was nothing new.

Just ask his crazy sisters or any of his friends, and they’d be the first to tell you:
If there was a bad decision to be made, Robbie always had a knack for making it.

And thus begins the story of the priest, the princess, and the prick.

If you are looking for a new series to binge read, then look no further. I read all four of these books in a matter of a few short days, even though I had so many other things that I needed to be doing. I have fallen in love with the MM romance genre, and I have also recently fallen in love with menage romance, especially MMM.

Ella Frank writes more on the erotic side, but that does not mean her stories are any less deep. I thought this series was very well done and very well written. I felt she really made me feel what the characters were feeling and made me feel connected to them. Throughout all four of the books, I got all three perspectives, but each book focused on a certain character before focusing on them as a whole. I really liked the way this was done because I got to see how their relationships built with each other while also understanding each character’s past. I felt the past really helped to understand each of them and what problems they needed to work on.

Robbie is a bright ray of sunshine who snagged the attention of two tortured men. Robbie showed Julien and Priest what it felt like to live again and brought carefree joy back into their lives. Robbie is a one of a kind character with his style, sassy attitude, and obsession with flavored lip gloss.

Julien is a sexy Frenchman who has let guilt consume him ever since his life changed eight years ago. He had Priest, but he was never able to fully let go of his past until Robbie burst in and brought in a new perspective. Julien is sweet and calm while his two men are intense and impulsive.

Priest is one of the most intense, stoic, and strong, characters that I have ever met. His tragic past shaped who he became and it’s the reason he doesn’t sleep at night. Priest is possessive and refuses to allow anything to happen to Robbie or Julien. I think Priest might have been my favorite overarching character development because the difference between who he is in book one and who he is in book four is night and day.

Robbie (the princess), Julien (the prick), and Priest (the priest), were a match who were always meant to be and they each new from the moment they set eyes on each other that they were it.