There were always whispers about my roommate at Hillcrest Academy.

The wealthiest of the wealthy sent their kids to our boarding school, and Brooke Bennett had been at the top, though I never quite knew why. She was fun and outgoing, but she kept quiet about her family. The only things she showed me were photographs of her brothers.

I became fascinated with her second-oldest brother. Kai Bennett.

He was the most of them all. Smoldering. Hypnotic. Alluring.

Kai had eyes that pulled me in and a face that haunted my dreams.

Then I met him.

He came to our school with their father, and that’s when I learned what kind of family Brooke came from. They were mafia, and Brooke’s oldest brother was dead. Her father said accident, but Brooke said murder.

Three months later, her father died, and Kai became the head of the Bennett Family. Brooke left Hillcrest for good, and that was the last time I saw her.

Fourteen years later, I’m staring at her face on the television. Brooke is missing. 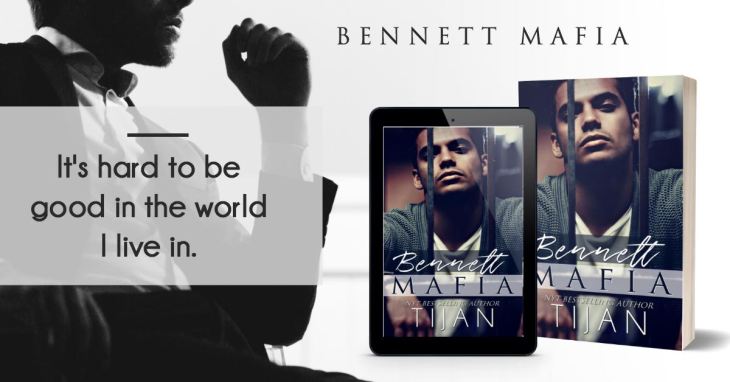 If you have been following me for any length of time, you will know that Tijan is my unicorn author. She is the author that I read anything and everything by her. She just really writes some captivating stories that grip me by the heart and never let go.

Tijan can certainly write some mafia books. I loved the way that she wrote Bennett Mafia. There were layers to the story that I was not expecting and really kept me glued to my seat. I was not ready for the depth that this story would bring. There were twists and turns and betrayals and just all around mafia goodness.

Riley has always had an unlikely connection to Kai Bennett despite the fact that he is dangerous and she should hate him. When she gets pulled into the Bennett’s dangerous world, she is not expecting to go through the moral battle that she encounters throughout the book. She knows right from wrong, but she also knows that Kai is a good man who does bad things. Ultimately she has to decide whether or not she will see only black and white or delve into the gray depths that Kai lives in in order to keep him.

I absolutely LOVE Riley and her loyalty. One thing that Tijan writes into her books that is strong and unbreakable is her character’s loyalty. Her characters are so loyal to the people around them that it creates a sense of family that I have not encountered anywhere else. Riley fights to keep her moral compass true while battling her desire for Kai Bennett. I loved being in her head throughout this battle and seeing her journey across the book. She is an extremely strong character who only wants to do what is right and good in the world. She also sees the the bottom of people and gauges who they truly are and whether she wants to help them.

I woke in a bed with the softest sheets I’d ever felt, and drool. So much drool.

It took a second for me to catch up, but once I did, I bolted upright with a gasp.

It was pitch-black outside.

Glass doors. The same modern bedroom with an entire apartment just beyond the doorway and the soft glow of a light on in the other room.

I was in Kai Bennett’s room, in his bed.

Could I close my eyes, go back to sleep, and wake up in Oz? Was that an option? I’d take it in a second if so.

The sound of a page turning came from the next room. Then I heard a chair push back.

Soft footsteps came until he stood in the doorway.

The light was on behind him, casting him in full shadow, so I couldn’t see any details except his very trim and toned silhouette.

Why’d someone so evil have to be that good looking?

“Why’d you take me?” I shifted to a sitting position, pulling the sheets around me and noting that I was in a different shirt and wore boxer briefs over my underwear. He’d changed my clothes.

That was low on the list of problems, but… “Where are my clothes?”

He let out a soft and tired-sounding sigh. “You stumbled going into your room and hit your head. My brother didn’t notice the blood trickling down your back, but my guards did. They alerted me.” He nodded. “Your clothes were bloody. They had to be changed.”

Now that he mentioned it, my head was pounding.

I touched the back of my head and hissed, feeling a large bruise. The fact that I hadn’t noticed that spoke volumes. I was too consumed by everything else.

And speaking of that, on to my second question. “What do you know about 411?”

He answered without hesitation, crossing his arms over his chest and propping one shoulder against the doorframe. “I know they helped hide you and your mother. I know they’re relatively new, but they’re effective. They have heavy funders backing them, and I know they set up one man for murder, who is now in prison. I know your employers might mean well right now, but they are dangerous.”

I blinked a few times, taking that in.

I winced on the inside when he mentioned the frame job. That had been an operative who went rogue, but no one fought to defend the guy.

I scowled. “He tried to murder his wife.”

I snorted. “You’re sticking up for the one slightly innocent monster? You?”

Watch your tone, Riley. You forget who you’re talking to.

I could hear my mother’s voice admonishing me, and I bit my lip as soon as the words were out. It was too late, though. I waited, watching to see if this infamous murdering monster would come toward me now.

He didn’t move, just murmured, “You are not a good enough fighter to speak like that to me.”

That same shiver went up my back. There was a deadly warning in there too.

I swallowed over a lump. “I’m sorry.”

But was I? Was I really?

He had murdered. Cord. His father. Brooke?

I frowned. “You’re looking for Brooke? That’s why you kidnapped me?”

“Among other reasons, yes.” He lifted his head again, straightening from the doorframe and taking a step toward me. Just one step—enough to be imposing, slightly intimidating, but still giving me space to breathe so I didn’t scare away.

He was so measured, so calculating.

“My sister contacted you the day before yesterday. I want to know where she is.”

All the oxygen left the room, and my head started spinning again. “You think—what? No.”

“Yes.” His voice was hard now. Gone was the subtlety. “Brooke asked me to keep tabs on you. She cares about you. You work for a network that specializes in helping people disappear, and I know she was desperate. She went to you; I know this much.”

He took another step toward me.

I sat up straighter, rolling to my knees and then to my heels, ready to spring if I needed to.

He squatted next to the bed so he was level with me, and now I could see him. He’d shifted out of the shadows, and I saw how fierce his eyes were. They blazed with anger and determination.

His perfect lips barely moved as he grated out, “You will tell me where she is.”

I swallowed again. The lump in my throat had doubled in size.

He wasn’t going to take no, but I had to try. “Before I saw your sister on the news, I hadn’t really heard much from her since you drove her away from Hillcrest. I swear to you that’s the truth.”

His eyes narrowed. “I know you know where she is, but don’t worry. If you won’t tell me, I know others who will.” He stood abruptly and went back to the main room.

I scrambled out of bed and padded after him.

I wasn’t prepared for what I saw. I don’t think anyone could’ve been.

I thought he had been reading a book, maybe looking over files for his business. I’d been sleeping in his bed, and he was waiting with a glass of wine beside a fire. Something cozy like that.

I was so wrong.

As I got to the doorway, I saw them, and someone started screaming.

Other news, The Boy I Grew Up With’s audio is live today!