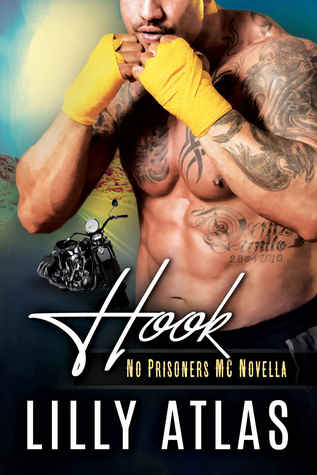 After ten years away, Marcie finally ventures back to where she grew up. She isn’t in town for twenty-four hours when she crosses paths with Hook and Striker, the two boys who kept her safe and happy as a young girl. Only they aren’t boys anymore. They are fully grown, muscular, alpha men. Members of the No Prisoners Motorcycle Club. All through her teenage years, Marcie’s heart belonged to Hook. Not that he ever seemed to notice. And it appears that as an adult, not much has changed with regard to her feelings toward the sexy biker. But a bossy, alpha man is not what independent Marcie is looking for.

The moment Hook lays eyes on Marcie, it’s as though the last ten years apart never existed. Back when she was off limits, he wanted her, and it doesn’t take long before he realizes he still wants her. Marcie’s changed, though. She’s no longer a frightened teenager in need of a haven. Now she’s a beautiful, confident woman, and a bit too independent. Will Hook be able to convince Marcie a life with him wouldn’t stifle her freedom? Their relationship is tested when Marcie clings to her hard-won life and when an aspect of that life threatens not only their future together, but their safety as well.

Y’all I am loving reading all these new MC authors whom I will be meeting in a few short weeks! I have been introduced to so many new worlds and I am stoked to be able to complete all these new series!

The problem I always have with novellas is that I feel like I don’t get a fully fleshed out story. However, Lilly knocked this one out of the park, and I truly felt like I got to know each of the characters and their histories. Childhood friends to lovers is one of my all time favorite tropes because I love seeing the real friendship first before it turns into something else. This was very well written and a fantastic introduction to this world of characters.

Marcie was a strong character who masked her abandonment issues with her need for independence. She refuses to let anyone help her, but Hook comes along and wants to show her what it feels like to be someone’s partner. I did get a tad frustrated with Marcie, but I understood where she was coming from. It was beautiful to see her story play out and to see her shell break apart under the watchful eyes of two men she considered family way back when.

Hook has his work cut out with breaking down Marcie’s thick walls, but he is one man who is up for the challenge. He knew she was way too young to be with when they were kids due to their age difference, but there is no way in hell he is letting anything stand in their way this time around. Hook is sweet and tender with Marcie, but your typical badass mofo to everyone else.

I can’t wait to read Striker’s story and see what Lilly Atlas does with the rest of the series!