“Kennedy Ryan weaves prose like a magician (or voodoo priestess) without sacrificing heat or page-turning angst to create authentic, living, breathing characters you want to root for to the end. Hook Shot is simply beautiful.” — Emma Scott, Bestselling Author

Hook Shot, a deeply emotional standalone set in the worlds of professional basketball and high fashion from Kennedy Ryan, is available now and FREE in Kindle Unlimited!

My perfect life blew up in my face and I’m still picking up the pieces.

The last thing I need is her.

A wildflower. A storm. A woman I can’t resist.

from the moment our eyes meet.

I promised myself I wouldn’t trust a woman again,

but I’ve never wanted anyone the way I want Lo.

She’s not the plan I made, but she’s the risk I have to take.

A warrior. A baller. The one they call Gladiator.

Kenan Ross charged into my life smelling all good, looking even better and snatching my breath from the moment we met.

The last thing I need is him.

I’m working on me. Facing my pain and conquering my demons.

I’ve seen what trusting a man gets you.

But he just keeps coming for me.

Keeps knocking down my defenses and stealing my excuses

He never gives up, and now…I’m not sure I want him to. 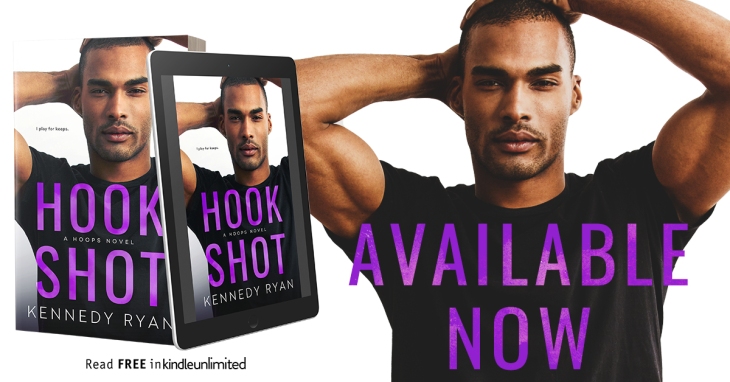 Kennedy Ryan. Now, this is a woman who knows how to write a breathtaking story that makes you think and makes you feel absolutely everything. Her writing is as beautiful as her soul, which is out of this world. I have had the privilege of meeting Kennedy twice now, and each time she has such a presence to her that draws people in. This comes across so clearly in her books, and it is one of my absolute favorite things about both her writing and her as a person.

I have been waiting for Lotus and Kenan’s story since we met them in Long Shot. They were drawn to each other from the moment they met, but they needed time to get to a place where they can explore whatever was between them, whether that’s friends or something more. I loved that they each took that time to sort themselves out before trying to add to it because it made it that much more special. They knew they shouldn’t cheapen it to mean anything other than special.

Lotus was my main girl in this book. She is a fighter who comes back swinging with each punch she has taken in her life. The connection she feels with herself, her surroundings, other people, and God/Higher Power, is beautiful. She doesn’t apologize for who she is and is constantly thinking of others before herself. She takes life by storm and goes with what feels right…even if, logically, it seems like something she shouldn’t be doing.

Put simply, Kenan is the man every girl wants to marry. He is kind and patient. He is generous and selfless. He is sexy as hell and easily reaches things off the top shelf. He is exactly who Lotus needed. After everything his bitch of an ex-wife put him through, he deserves to find happiness with his PYT. I loved how he loved both his daughter and Lotus.

This book was straight magic. It’s like Kennedy Ryan has a direct line to my heart and her words simply float in and stay there. Her words have taught me so much about life and love and about fighting. Honestly, that is all we can ask for from a book. That it teaches us something. It is what distinguishes a good writer from a great one.

I absolutely adore Kennedy Ryan, and I’ve been enthralled with her Hoops series since she published Long Shot.  This series pushes so many boundaries, but in a way that you don’t even realize just how deep these stories go.  Kennedy has an absolute gift for weaving a tale that sticks with me for days and days after I’ve closed the covers of the book.

I’ve been so excited to read Kenan and Lotus’s story and I feel like we’ve been waiting forever, but Kennedy is a smart woman and she absolutely knew what she was doing when she made this the third book in the series!  Kenan is in New York for the summer, to be near his daughter, and to try to work through aspects of his divorce with his ex wife.  She desperately wants to get back together, but Kenan isn’t interested in anyone but Lotus.  Lotus on the other hand, has sworn off sex for the summer, and she conveniently puts Kenan right into the friend category while she tries to work through some personal issues.

When it comes down to it, Lotus is the true hero of this story.  She’s a fighter, and even though she’s been through so much, and experienced so much trauma at such a young age, she pushes through to come out on top.  She does all this, while at the same time working and sacrificing for Kenan and his daughter Simone.  And Kenan is the poster child for the perfect man, because I swear, you can’t get much better than him.  I mean, he even gave Grip a run for his money y’all and you know I love Grip!

Overall, Hook Shot is an absolute masterpiece, and is not to be missed.  This is Kennedy Ryan at her best, and I’m on pins and needles to see what other treasures she will bring us as the years continue.  Because I will read anything she writes, including her grocery list.  I am that big of a fan.  Plus, Kennedy is one of the sweetest, kindest, and most loving souls that I have ever met, and I’m thrilled to be seeing her again at Book Bonanza this year!

Download your copy today or read FREE in Kindle Unlimited!

Start the HOOPS series with LONG SHOT today for only 99¢!

After talking to Kenan for the last few minutes, and looking under his hood, so to speak, I’ve found that he’s a classic. They don’t make them like him anymore, and if I don’t change the subject, change the course of this conversation, I’ll fool myself that we don’t have to keep things simple and that we could be more than just friends, not just for the summer, but for a long time to come. As long as I’d like.

“Okay,” I say, switching gears without a clutch and pulling a tie off another of Amanda’s racks. “I think that shirt could work really well with this tie.”

He doesn’t look at the tie I’m holding up, but keeps his eyes fastened on me. He’s not playing along. I’ve boxed myself into a corner with him. And the quarters are too tight. His scent. His warmth. His intelligence. His thoughtfulness. He is pressing in on me, overtaking my good intentions in all the ways I never thought a man could.

“Try this on,” I say, blindly shoving the mint green shirt at him.

When I look at him, he’s already peeled one shirt off and is reaching for the one I chose. I didn’t think this through. Didn’t forecast that Kenan changing from one shirt into another would mean his naked chest. I lose my train of thought and all my chill. Besides my mouth dropping open at the sight of the sculpted terrain of his chest and abs, I give no other indication that he affects me. Taut, bronze skin stretches across his broad shoulders like supple canvas pulled over a frame, the foundation of a masterpiece. He’s a big man. Not bulky, but instead chiseled to the specifications of a master sculptor: arms roped with muscles, biceps like rocks under skin glowing with health. The forearms Chase raved about are lined with veins and sinew. And I die for a great chest. I’ve never seen one more spectacular than Kenan’s.

Jesus, my mouth is literally watering at the thought of tasting them, sucking them, licking them. And if that pectoral perfection weren’t enough, the two columns of muscles, four each, are stacked over his lean stomach arrowing down to a narrow waist and hips. I can’t look away. I lick my lips, imagining how he would feel under my mouth. How I’d lick around his nipples and drag my tongue down that shallow path bisecting his abdominal muscles. I’d slip that belt off and sink to my knees. Unzip those pants and take him out. God, hold him in my hands and then take him all the way to the back of my throat. I’d choke on him. A man this big . . . I’d be so tight around him.

“Lotus,” Kenan says, jarring me from my torso trance. “Should I go ahead and put this shirt on? Or did you need a little more time?”

I snap a glance up to his face, embarrassed to find him laughing at me. Oh, God. I’m as bad as Amanda. I turn to leave, but he catches my elbow with a gentle hand and turns me back around, walking us behind two of the racks. He bends until he’s almost eye level with me.

“Don’t be embarrassed,” he says, searching my face intently. “I’m glad you like my body.”

“I didn’t say I . . .” My words trail off at his knowing grin. “Okay. So you have a nice body. I work in fashion. Do you have any idea how many great bodies I see on a daily basis?”

“I’m sure many,” he says, his smile still firmly in place. “I can’t speak for any of them, only for the way you looked at me.”

“And how do you think I looked at you?” I ask defensively, forcing myself not to look away.

In the quiet that follows, his smile fades, and heat replaces the humor in his eyes. “You looked at me the way I bet I’ve looked at you every time you walk into a room,” he says, the timbre of his voice rolling over my sensitive skin like a caress. “Like I would eat you if I could. Head to toe, everything in between.”

“Kenan,” I protest, closing my eyes on a groan. “We said friends. We said simple. This is not how you start a simple friendship.”

His large hand cups my jaw and lifts my chin. I open my eyes, blinking dazedly at him. I wasn’t prepared for how his touch makes me feel. How I instantly crave more of it; want to lean into the warmth; to turn and trace his lifeline with my tongue. Tell him all the things I could discover just from reading his palm and looking into his eyes.

How can such a large hand feel so gentle, like it’s capable of treasuring, cherishing?

“Okay, Lotus,” he says, regret and reluctance woven around my name. “Simple. Friendship.”

A Top 25 Amazon Bestseller, Kennedy Ryan writes about women from all walks of life, empowering them and placing them firmly at the center of each story and in charge of their own destinies. Her heroes respect, cherish and lose their minds for the women who capture their hearts.

She is a wife to her lifetime lover and mother to an extraordinary son. She has always leveraged her journalism background to write for charity and non-profit organizations, but enjoys writing to raise Autism awareness most. A contributor for Modern Mom Magazine and Frolic, Kennedy’s writings have appeared in Chicken Soup for the Soul, USA Today and many others. The founder and executive director of a foundation serving Atlanta Autism families, she has appeared on Headline News, Montel Williams, NPR and other media outlets as an advocate for families living with autism. 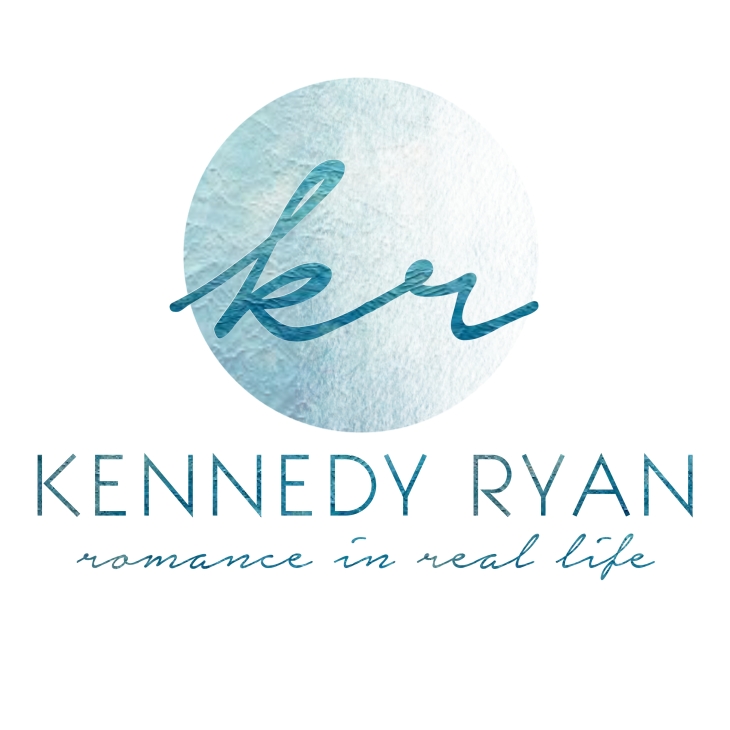